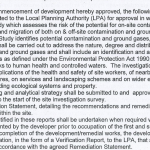 determine if the site will be ‘suitable for use’ and that the site could not be determined as
contaminated land under Part 2A of the Environmental Protection Act 1990 once developed  a contaminated land planning condition was attached to the decision notice for the subject planning application.

Demeter Environmental were commissioned to prepare the reports required to discharge the contaminated land planning condition.

The contaminated land planning condition (condition 8 of the decision notice) was split into three sections (a, b and c). with each part needing to be discharged before continuing to discharge the next part. 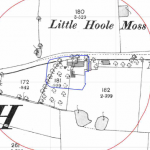 The O.S. maps revealed the site was formally an orchard and two in-filled ponds were present in close proximity to the site.  The aerial plated identified a building on the south western area, likely stables. The street level imagery confirmed the building was a single storey brick building.

The environmental data revealed there was a vehicle repair workshop to the south of the site. 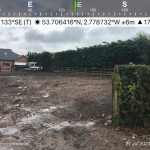 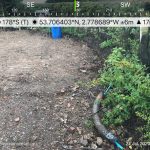 On completion of the desk based assessment a site walkover survey was undertaken,  it was noted that the building previously on the site had been removed and the grass in area around the building had been removed. Made ground was identified in the area of the former building.

Given the limited area made ground was identified, remediation as an alternative to site investigation was proposed, with the preferred option being remediation. 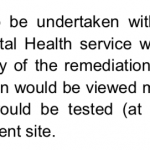 The memo (‘Consultee Response – Env Health Pollution – SRBC’) confirming the acceptance of the recommendations of the desk study report also noted that a worse case scenario would need to be taken if no site investigation was to be undertaken and sampling at the base of the excavation(s) would be required.

Once the Phase I report has been accepted Demeter Environmental were commissioned to prepare the Remediation Statement (Phase IIIa Implementation Plan) in order to discharge part c of the contaminated land planning condition. The statement took into account the concerns raised by the contaminated land officer and provided details of how the remediation was to be undertaken and validated.

The Phase IIIa report was submitted (07/2020/00662/DIS) and the proposed remediation had been accepted. 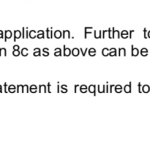 As of April 2021 the development was in the construction phase and remediation was ongoing.