A factual environmental data  report was submitted in July 2016 to discharge the contaminated land planning condition, which was rejected by the local authority as the document was no a Desk Study report.

Demeter Environmental were commissioned to prepare a desk study report to comply with the requirements of the local authority. 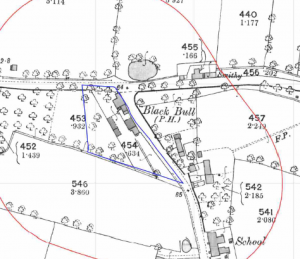 The review of the historical O.S. maps revealed that the site was used as an orchard prior to the erection of the public house  circa 1892, aerial plates conformed the

buildings were present up to 2015. Streetview images indicated the site was cleared between August 2015 and July 2016.

The O.S maps revealed two in-filled ponds and a smithy in close proximity to the site.

Environmental data in the Groundsure reports and data provided by the Environment Agency did no reveal any further potential sources of contamination, and the data indicted the controlled waters in the vicinity of the site were of low sensitivity.

As there where no credible sources of contamination, a conceptual model for the site could no be constructed, demonstrating that no further works were required.

The decision notice accepting the desk study report is here.