One of the conditions applied to the decision notice for the erection of a dwelling on a plot of open land, Nantwich (Planning Reference 14/5854N ) was a contaminated land planning condition (as the developed was considered sensitive contamination is assumed until proven otherwise with a minimum of a Phase I desk study report). Demeter Environmental were commissioned to prepare the desk study report.

formed part of the curtilage of the adjacent property. A canal was identified on all O.S maps 240m south west of the site.

The review of the 1:50,000 geological maps published by the BGS revealed the site was underlain by River Terrace deposits comprising of sands and gravels. The bedrock was the Wilkesley Halite Member (Halite-stone and mudstone) of the Carnian epoch.

The data on background geological hazards indicated that concentrations of arsenic, cadmium, chromium, nickel and lead were below there respective residential S4UL’s / C4SL’s. The canal 240m south west of the site was identified as potentially in-filled land and was discounted as the canal was present an the most current O.S maps.

The site walkover confirmed hat the site was a garden and there was no evidence of made ground or any other credible source of contamination being present on the site.

The report concluded that there was no credible surcease of contamination, and as a conceptual model could not be constructed, no further works were warranted. 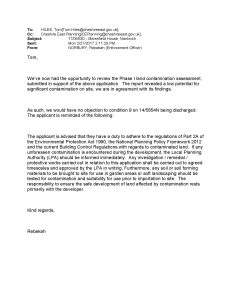 he report was submitted as part of an application to discharge (17/0693D) and the report was accepted and the contaminated land planing condition discharged.