Given the site being located in a former coal mining area the Coal Authority raised an objection to the application and required a preliminary assessment (Coal Mining Risk Assessment) of the risks from coal mining to be undertaken before their objection would be withdrawn.

A Coal Mining Risk Assessment (CMRA) comprises of a review of the information held by the Coal Authority as well as other geological data such as documented geology and borehole records in the public domain. 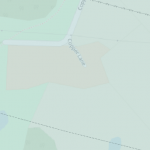 The published geology for the site comprised of Devensian Till (Boulder Clay) underlain by Pennine Middle Coal Measures, no information on the depth to bedrock was available and there were no BGS boreholes in the vicinity of the site.

Information provided by the Coal Authority indicated the ‘Worsley Four Feet’ coal seam outcrops on the site, and given as the depth to bedrock was unknown this was a potential stability issue. 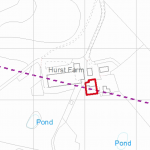 The CMRA concluded that there was the possibility of a coal seam outcropping across the site and that once planning had been granted this would need to be investigated. 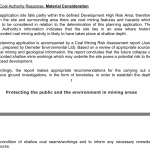 The report can be accessed through the Bury Council planning portal (65530) and is identified as ‘Coal Mining Risk Assessment’, the memo from the Coal Authority accepting the report is ‘Coal Authority’.