The review of the historical Ordnance Survey maps revealed the industrial estate the site was located was not developed until between 1955 and 1967, it was not until the 1974 map that the adjoining land was developed. Whilst the site was not developed, the land did form part of the curtilage of the eastern building. A variety of industries (warehouses, works, offices etc.) were identified within 50m of the site as well as two in-filled ponds.

Streetview images published between 2008 and 2016 did not show any significant changes ot the site but did reveal the site was gravelled with a container and a temporary office stored on the site. The October 2014 image shows that the gravel has been replaces with asphalt, the temporary office has been removed and palisade fencing has been erected on the southern area of the site. The images also show that the eastern building has been used for the sales of vehicle parts and accessories, with the site being used as parking for company vehicles. 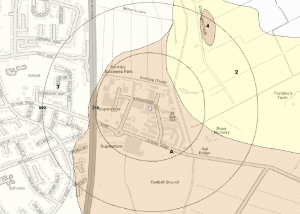 The BGS geological map for the area revealed the drift deposits comprised of alluvium, which has the potential to generate ground gases

Data contained in the Groundsure reports indicated that the eastern building was used for vehicle part sales and the building to the south was associated with vehicle repairs.

Based on the results of the qualitative risk assessment and low sensitivity of the site it was determined that further intrusive works were not appropriate and limited remediation (specification of water mains and removal of any made ground from foundations as well as the incorporation of a gas membrane in the building design) was more appropriate.

The report was submitted alongside the planning application, which was approved in February 2017 and no contaminated land planning condition was attached to the decision notice.